Paul Ryan’s Roadmap to the Top

In the past decade, arguably no member of Congress has made more of a mark on budget and tax policy than Rep. Paul D. Ryan. And while the Wisconsin Republican’s fundamental views on federal spending and revenue have remained steadfastly conservative, he’s also shown a willingness to make subtle, pragmatic shifts. It’s a delicate balance Ryan will likely try to maintain in his new perch as speaker. 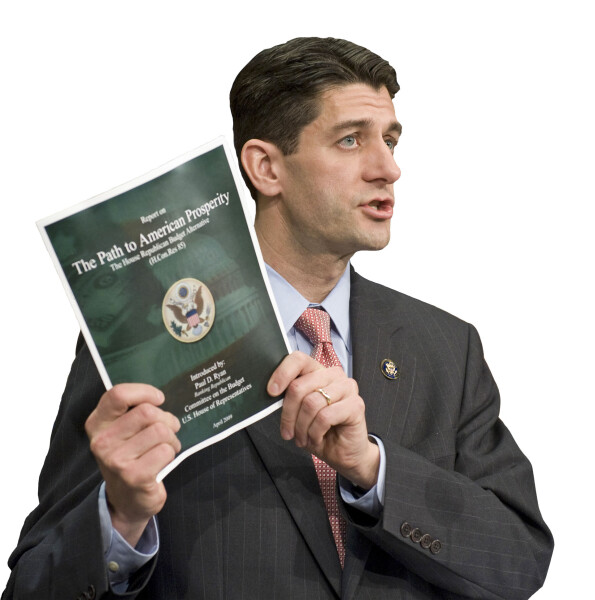 Ryan wins a seat on the Budget Committee as the youngest member of the freshman class and acolyte of former New York Republican Rep. Jack F. Kemp, an optimistic promoter of supply-side economics.

As the top Republican on the Budget Committee, Ryan rolls out what will become his signature manifesto, “A Roadmap for America’s Future.” His plan calls for deep cuts in domestic programs, a broad tax code overhaul that slashes rates and major changes to entitlement programs.

His most far-reaching proposals would turn Medicare into a voucher program, hand over Medicaid spending to states as block grants and partially privatize Social Security. His roadmap doesn’t move past committee in 2008, but in 2009, it forms the backbone of the budget plan offered by House Republicans; the measure stands no chance in a Democratic-controlled House, and even 38 largely moderate Republicans vote against it on the floor.

Ryan relaunches his roadmap with many of the same ideas, but with a more pointed aim at the Obama administration’s budget policies. Ryan’s Medicare plan draws flak from Democrats who run television ads in which a Ryan look-alike dumps an elderly woman in a wheelchair off a cliff.

Ryan has a chance to make sweeping fiscal changes as a member of the Simpson-Bowles Commission, an 18-member bipartisan panel tasked with drafting a plan to reduce the deficit. He ultimately leads a bloc of three House Republicans to oppose the final recommendation because it would raise taxes. Their opposition helps deny the plan the 14 votes needed to receive a vote by the full Congress.

Riding the 2010 tea party wave, Republicans take the House and Ryan becomes Budget chairman. He soon unveils his latest budget blueprint, “The Path to Prosperity,” which contains many of the tax and spending cuts in his earlier roadmaps, but drops a few of the most controversial provisions, including a proposal for private Social Security accounts.

President Barack Obama, in a speech at George Washington University that Ryan attended, blasts Ryan’s budget as “deeply pessimistic.” Ryan responds by calling the speech “demagoguery.” The plan is adopted by the House, with only four Republicans opposed. The Democratic Senate does not take up a budget, and the House doesn’t try to implement most of the policies in its budget.

Ryan helps thwart multiple attempts at bipartisan fiscal deals in 2011 that would have raised revenue. His withering criticism of a bipartisan deficit-reduction plan by the Senate’s Gang of Six is a death knell for House support. A few months later, he is one of several conservatives who help convince Speaker John A. Boehner to back out of talks with the White House on a “grand bargain.”

With elections looming in November 2012, Ryan again unveils an ambitious budget proposal. Still, in a politically savvy concession, his latest plan would convert Medicare to a voucher program but also give people an option to purchase traditional Medicare-style coverage with a federal subsidy.

In a sign of the dominance Ryan’s vision holds over his party, during the presidential primary, anti-tax activist Grover Norquist says the next GOP president should simply have “enough working digits to handle a pen” in order to sign Ryan’s plans into law.

2013: A Rightward, Then Pragmatic, Shift

Responding to demands from his party’s right flank, Ryan offers a budget with even deeper cuts in federal spending, in order to balance the federal budget within a decade.

Amid the fight over whether to shut down the government over the president’s health law, Ryan keeps a low profile; he would later call the October government shutdown a “suicide mission.” 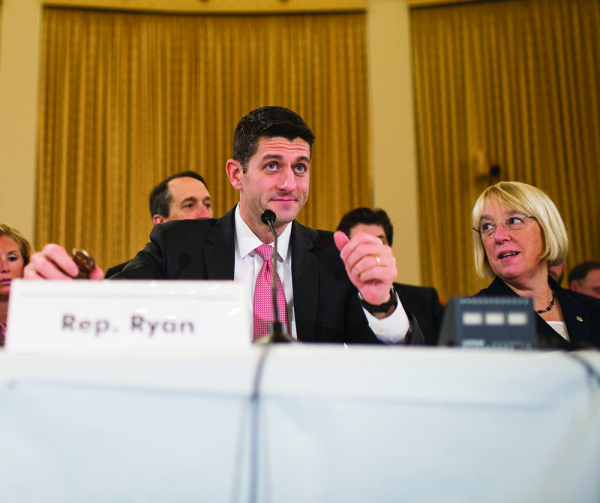 After the government is reopened, Ryan joins with Senate Budget Chairwoman Patty Murray, D-Wash., in December to reach a bipartisan deal that sets spending caps for the next two years and eliminates some of the automatic sequester cuts with $85 billion in offsets found elsewhere in the federal budget. The plan wins broad support in both chambers, although 62 House Republicans vote against it.

In a sign of his broad ambitions, Ryan marks the 50th anniversary of the War on Poverty with a scathing report on its results; he recommends transforming many federal programs, including turning some into block grants to states.

He becomes chairman of the Ways and Means Committee, giving him authority over entitlements, taxes and trade. Working closely with GOP leaders and the White House, and over the objections of tea party-backed lawmakers, Ryan helps shepherd a trade promotion authority bill to passage.

He also sets about overhauling the international tax code, with hopes of using an infusion of revenue to pay for new highway spending. Meanwhile, new Budget Chairman Tom Price, R-Ga., models his fiscal 2016 budget resolution on the ones that Ryan drafted in recent years.