It should have been easy for the House to adopt a budget resolution this year. 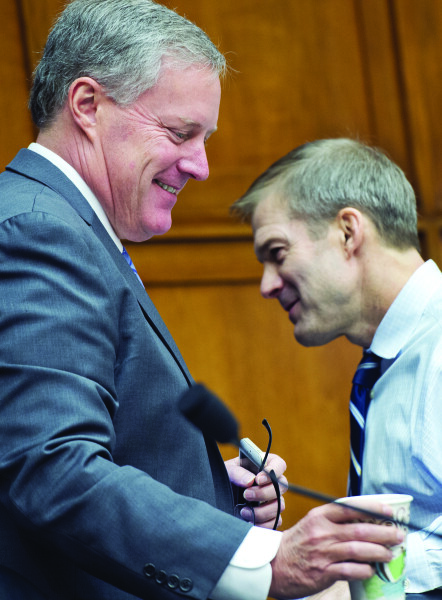 Instead, 2016 is likely to go down as the first year in the modern era that House Republicans couldn’t muster the collective will to approve a document that almost all of them consider critically important. A congressional budget resolution isn’t a law, and appropriators are able to continue work without it and ensure the government keeps running. But a resolution approved on the floor by a House majority would have conveyed an authoritative message about Republican priorities and policies.

In the end, though, that vision has become as confused and divided as the GOP itself in this year of tumultuous politics for the party, in the presidential race and beyond. The battle over the budget resolution emerged as a last stand for House conservatives frustrated with the size of government and the slow pace of change in the nation’s capital. Their insistence on trying to break the spine of a bipartisan spending deal reached last year annoyed those who saw a prolonged battle over spending levels as only aiding Democratic critics.

Yet conservatives say it’s been worthwhile. “What we’ve done in the past is we continue to approve higher and higher numbers with the potential for savings that would come later,” North Carolina Republican Mark Meadows, a member of the conservative House Freedom Caucus, says. “And the savings never come later.”

On the surface, work on a budget this spring seemed like it would be stress-free. The overall spending levels had already been laid out in a bipartisan budget deal reached in 2015, after weeks of tough negotiations. Republicans hold the largest majority in the House in decades. Their leader, Paul D. Ryan of Wisconsin, is the most popular and conservative speaker in memory.

On top of that, the proposed House Republican budget for fiscal 2017, which starts on Oct. 1, was arguably to the right of any previous budget. It envisioned cutting projected spending by $6.5 trillion over a decade. And even though a budget was not necessary this year as a prerequisite to bringing appropriations bills to the floor, most Republicans agreed that in this presidential election year, it would benefit the GOP to be able to unite behind what would amount to a shared fiscal vision.

Nevertheless, adoption of the budget was blocked by a group of hard-line conservatives who opposed the $1.07 trillion discretionary spending topline  in the plan. The budget sets enforceable tax and spending levels for the coming fiscal year, though rules allow floor passage of spending bills after May 15 even without a budget in place.

“It is a conundrum, isn’t it?” says G. William Hoagland, a senior vice president at the Bipartisan Policy Center who helped get budgets passed as a former top GOP Senate leadership and budget aide. “Even with the popular Paul Ryan and somebody who’s willing to reach out, and a high majority, it is an indication of how divided the House caucus still remains.” 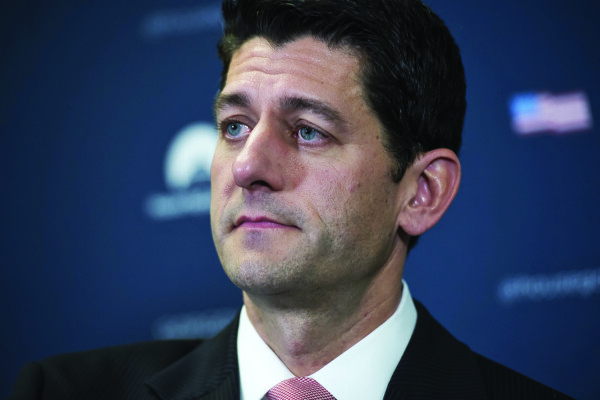 Two-thirds of House Republicans voted against raising the caps. Some of them remain strongly opposed to the higher spending limits. It is a problem for them that the budget resolution reported out of the House Budget Committee in March reflects those higher caps.

But there’s more to it than that.

Conservatives who oppose the budget resolution see themselves as engaged in a war to roll back the size and scope of the federal government. They are frustrated with a lack of progress in achieving their goals and have grown impatient with compromise, which they say at most slows the growth of the federal leviathan. They see the budget resolution as one place to take a stand.

Texas Rep. Bill Flores, chairman of the conservative Republican Study Committee, which also opposes the budget at the $1.07 trillion level, says prior Congresses have “just ignored a few billion here, a few billion there, and so we’ve got to try to draw the line.”

Rep. Jim Jordan, chairman of the Freedom Caucus, insists that any increase in the topline above the previous $1.04 trillion level has to be offset with real — meaning enacted into law — savings.

“We’ve got a fiscal mess here in Washington and we shouldn’t spend more money,” the Ohio Republican says. “We’re for spending less money, going to the lower number.” Jordan adds that the only way the Freedom Caucus would support the higher topline is in exchange “for something real, a real change that’s going to save real money in some other area, or some real policy change that long term is going to save real money, that’s actually going to become law.”

The embattled former Speaker John A. Boehner of Ohio negotiated the budget deal as his last major act before retiring as a way to “clean the barn” for his successor, Ryan. Ryan, who voted for the deal, made the case to fellow Republican lawmakers in closed-door sessions that breaking from the budget agreement would disrupt the appropriations process and force Congress to default to a stopgap spending resolution.

“The reality is that it exacerbated the divide within the conference, not healed it,” says Dan Holler, vice president for communications and government relations for Heritage Action, the influential conservative advocacy group fiercely opposed to the higher topline. “You can’t just paper over these differences and expect lawmakers who for very good reasons opposed that budget deal to then say, ‘Well, I’m going to now accept and embrace those numbers.’”

House Budget Chairman Tom Price, who voted against raising the caps but then wrote a budget resolution reflecting the higher spending limits, agrees the budget deal was the “genesis” of the inability so far to get the votes. 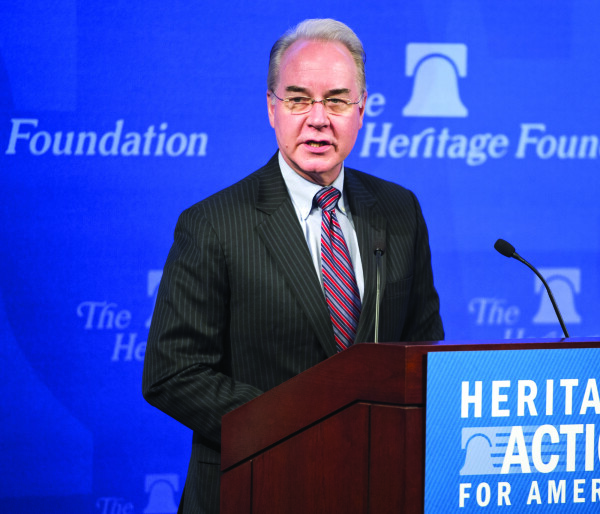 But the Georgia Republican also expresses doubts he could have moved the budget through committee at the lower $1.04 trillion topline favored by conservatives. Appropriators and defense hawks, among others, he says, insisted on the higher topline because it would comply with the law and ensure more funding for the military.

A majority in the conference supports the budget resolution at the $1.07 trillion level, even though many of them voted against the budget deal. Yet the resolution would need more GOP votes than that for floor adoption, since Democrats are sure to unite against it.

More than a few Republicans say they are perplexed over the continuing opposition, which they see as counterproductive and playing into Democrats’ hands.

Oklahoma Republican Tom Cole, who represents the Appropriations Committee on the Budget Committee, calls the budget deal a “reasonable compromise” that was necessary to get Democrats to agree to the higher defense spending sought by Republicans. Even under the higher caps, he says, “it’s less money than we planned to spend in 2011 in the first Ryan budget, and we’re still spending at a lower level than when George Bush was president of the United States in the discretionary budget.”

“So why people can’t grasp those simple realities, I can’t explain,” Cole adds.

Partly because Republicans have made such an issue of the other party’s failure to pass budget resolutions in the past, the GOP’s inability to adopt a budget has proven to be a bonanza for Democrats. The minority has sought to portray Republicans as unable to govern because of an uncontrollable extremist element.

“You have this ongoing fight between the far, far right and the far, far extreme tea party right,” Maryland Rep. Chris Van Hollen, ranking Democrat on the Budget Committee, says. In a further slap at the GOP, he adds the budget resolution “was, I believe, unacceptable to the vast majority of Americans because it was the old warmed over trickle-down economics. But apparently it wasn’t bad enough for the tea party wing.”

Scott Lilly, a senior fellow at the liberal Center for American Progress and a former Democratic staff director and clerk for the House Appropriations Committee, blames what he calls “really crazy, wacko” Republican lawmakers who were swept into Congress in 2010 and who, he says, have no interest in working with other lawmakers to pass legislation. “They came to send a message and to change things and they’re going to dig in their heels, stop the world until they get what they want,” he says. “And that’s why they think they were elected.”

While Lilly did not mean to deliver a compliment, many conservatives would agree they came to Washington with a mission that transcends legislation.

Heritage Action’s Holler calls it a “mythology that has built up in Washington that the American people really want to see Congress operate efficiently.” If that were the case, he says, “Democrats would have been wildly re-elected in 2010 because Congress was pretty darn efficient in 2009 and 2010” when it passed and President Barack Obama signed a restructuring of the health care system and other far-reaching legislation.

Many conservatives who had high hopes for substantive change once Republicans gained control of the Congress feel that little has been accomplished, adding to their frustration. As Norman J. Ornstein, a resident scholar at the American Enterprise Institute, puts it: “Name me an agency that’s been eliminated. Name me a program that’s been eliminated. None of that has happened.”

Sal Russo, a political consultant and co-founder of the Tea Party Express, lent his support to Price’s budget resolution even with its higher topline. But he says he appreciates the “frustration and the belief that nothing ever happens” among budget opponents.

The deterioration of the budget process, characterized by a poor record of the House and Senate being able to successfully pass and conference appropriations bills in recent years, also may be playing a part. Some conservatives say they are unmoved by arguments that adopting a budget resolution will make it easier to pass appropriations bills because they doubt many appropriations bills will be passed under any circumstances. While the House has managed to move eight  of the 12 regular appropriations bills out of committee and passed two on the floor, it’s widely expected that a stopgap spending bill will be needed later this year.

Others argue that advancing a budget with a lower topline would give Republicans more leverage because they could strike a deal with Democrats for higher spending, in exchange for keeping more of the policy riders sought by conservatives.

“That’s nonsense,” objects Cole. “First of all, you don’t get anybody to help you on something like that when you’re breaking your word. The number is 1.07. That’s the law.” 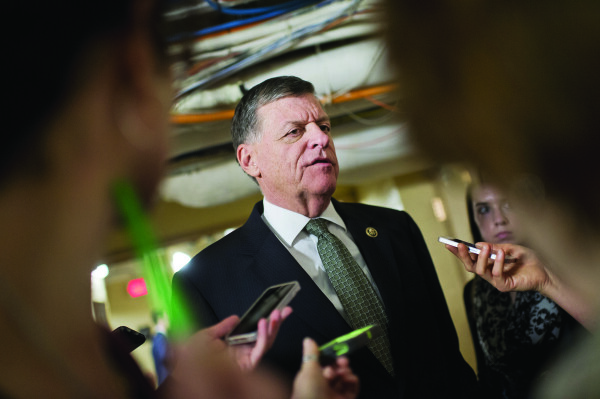 Cole says he asks himself in a negotiation, “How would I react if somebody did that to me?” If Democrats broke from a budget deal that had been negotiated between the two parties and enacted into law, Cole goes on, “I would use colorful language to describe what I would do and there certainly wouldn’t be more concessions that followed.”

Budget resolutions come and go. And, as Ryan has told the conference, the House under budget rules can get by without one this year. More significant going forward is the division between Republicans that has stopped the budget in its tracks and will surely affect other legislation in the future. There is no reason to think that dynamic is going away.