House Rules, Made to Be Broken?

The revolution was short-lived. 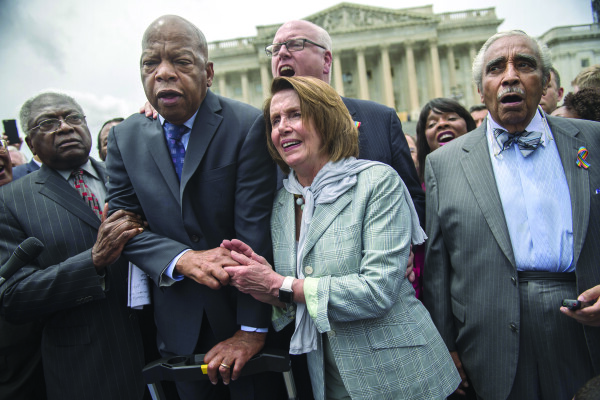 After a series of dramatic floor protests on gun control in late June, House Democrats have since largely stayed within their lanes, opting for less spectacle, more procedure.

“A multitude of moments of silence weren’t working,” Steve Israel, the New Yorker who chairs the House Democratic Policy and Communications Committee, said after he led a group of colleagues in disrupting an otherwise routine pro forma session on June 28. “Stay tuned, ladies and gentlemen. Stay tuned,” he said.

The following day, Democrats coordinated to hold gun-control rallies, or sit-ins, in their home districts, what they said was a continuation of the floor events.

On July 1, though, the Democrats were nowhere to be found for the House’s pro forma session and the nearly empty chamber briskly moved through a drama-free set of motions before the Independence Day holiday.

And when the House returned from the long weekend, Democrats largely kept to the norms of institutional behavior while again trying to convince Republican leaders to schedule votes on gun-control bills.

“Mr. Speaker, in the wake of the horrific events in Orlando on June 12, an extraordinary group of Americans have come together calling for common-sense gun control legislation,” Connecticut Democrat Joe Courtney said in his one-minute speech on July 5.

He then called on Congress to pass two bills he and his colleagues had been calling for votes on since June 22 and 23, when his caucus effectively shut down House proceedings to demand those votes — in the process violating the chamber’s rules of decorum.

Courtney, who moments earlier had led the chamber in the Pledge of Allegiance, was the first Democrat to be recognized and speak since Republican leaders abruptly recessed the chamber in the early hours of June 23 to cut off the Democrats’ protest, which featured a sit-in in the well of the chamber.

Down the hallway in the Rotunda, meanwhile, a group of families and friends of gun violence victims held their own sit-in. Capitol Police removed them with little fanfare.

A few hours later, two Democratic elder statesmen who had led the earlier floor sit-in, John Lewis of Georgia and John B. Larson of Connecticut, met with Speaker Paul D. Ryan to discuss the way forward.

They got no promises from Ryan, but they did say they would keep talking, and in the meantime, Democrats used their one-minute speeches to continue to call for votes.

These events unfolded even as Ryan and his team met with the sergeant-at-arms and the parliamentarian to discuss what to do about the initial floor disruptions, including whether and how to sanction the Democrats.

“That was not behavior becoming of the United States Congress,” House Majority Leader Kevin McCarthy told a group of reporters.

The Capitol braced for another intractable fight. But sometimes outside events swirl hard enough to shake people out of their positions.

Shootings by police that resulted in the deaths of black men in Baton Rouge, La., and Falcon Heights, Minn., and the ambush and killing of five police officers in Dallas, cast a pall over the nation and its representatives in Congress. On July 8, Ryan, Pelosi, McCarthy and Minority Whip Steny H. Hoyer all appealled for calm and a de-escalation of rhetoric.

The normally contentious colloquy between McCarthy and Hoyer was defused, with both men pledging to work together. 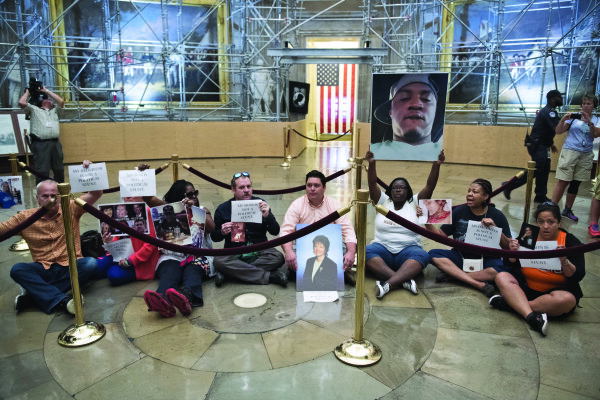 Following Democrats’ action on the floor, a coalition of families and friends of victims of gun violence staged their own protest in the Capitol Rotunda. Capitol Police removed them shortly after.  (Bill Clark/CQ Roll Call)

“This week has been a sobering week.  A sad week,” Hoyer said. “The majority leader and I have had brief conversation on the floor, where he said to me, and I agree, that we need to sit down together and try to see how we can bring this country, this House, together on a way forward.”

If they do find common ground, it would be an extraordinary result, considering  the strain the chamber had recently borne.

The House had rarely witnessed the sort of spectacle House Democrats brought to bear on June 22. Each time Republicans attempted to call the House to order, Democrats shouted them down. And when the chamber went into recess, Democrats stayed on the floor to continue their vigil and call for votes on two specific pieces of legislation.

One, introduced by Republican Peter T. King of New York in February 2015, would limit those suspected of terrorism from buying firearms (HR 1076). The Democrats have referred to this as simply, “No Fly, No Buy,” but it’s a bit broader than that, providing the attorney general leeway to deny purchases and allowing those affected by the law to petition the government for redress.

The second bill, introduced by King in March of last year, would expand background checks for people attempting to buy guns (HR 1217).

Unlike the Senate, where members of that chamber have a multitude of rule-abiding parliamentary tactics at their disposal — including the most famous, the filibuster — House members have few options to bring such spectacle to their causes.

So when Democrats occupied the floor for nearly 26 hours and used social media and personal devices to broadcast their actions, attention was paid. After all, such guerilla tactics were violations of the rules.

House Republican leaders control the cameras that provide outlets such as C-SPAN with each day’s proceedings. So when the feed went dark, Democrats turned to their own devices, literally, to broadcast their vigil.

But members are prohibited from using cameras and video recording devices on the floor.

The result was something that went beyond previous breaches of decorum, such as in 2008 when Republicans occupied the floor during the August break to discuss gasoline prices, even after House Democratic leaders (in the majority then), turned off the microphones and lights on their colleagues. There was, after all, no Periscope or Facebook Video feature to vividly document those days.

“I don’t think anyone enjoys violating the rules of decorum,” Israel had said on June 28. That day’s six-person protest got some coverage, though nothing like the wall-to-wall and social media-driven sort from the earlier sit-in.

But Israel might have hinted about the direction Democrats were headed. “Negotiation is the best way out,” he said.

Besides their allotted one-minute speeches and talks with GOP leaders, Democrats have other means to liberate legislation otherwise marooned in the Capitol’s labyrinthine legislative process.

One tactic is currently being deployed by nearly every Democrat.

The maneuver, a discharge petition, is one of the few options available to the minority party or those outside the majority leadership power structure, to dictate the floor schedule.

If legislation has been introduced but hasn’t moved out of committee, a majority of the House, 218 members, may sign onto a discharge petition to move it to the floor.

Israel and 180 of his fellow Democrats have signed onto a discharge petition for the “No Fly, No Buy” bill.

The tactic is rarely successful. Leadership hates the maneuver because it undercuts their authority. They lean hard on their members to withhold support. It’s telling that no Republican, not even King, has signed on to this particular petition.

Last year, though, dozens of Republicans joined with Democrats on a discharge petition to bring a reauthorization of the Export-Import Bank to the floor, a rare instance of the move proving successful.

More pedestrian maneuvers are available as well, including offering a motion to recommit legislation with instructions. This is essentially the last chance to amend a bill before passage, and a well-crafted one makes it difficult to oppose.

Democratic leaders will remember the wrangling from days when they controlled the chamber. In 2007, the Democratic majority was set to approve bipartisan legislation granting the District of Columbia a vote in Congress.

But the threat of a GOP motion to recommit that would have targeted the District’s gun control laws was enough to prompt Democratic leaders to pull the measure from the floor altogether, fearful that conservative members of their caucus would join Republicans in approving the motion to recommit.

The legislation never got that close again. 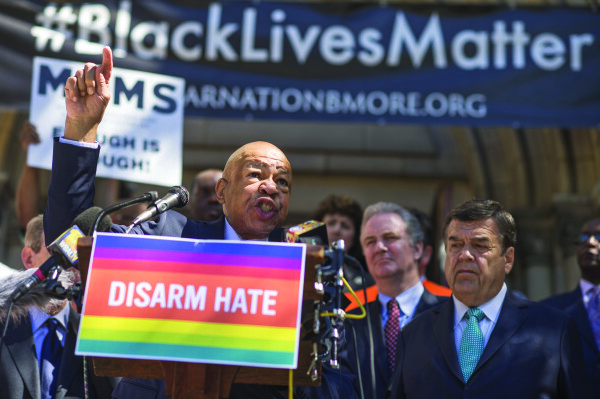 During the recess, Democrats staged rallies in their home districts, such as this one in Baltimore.  (Tom Williams/CQ Roll Call)

Democrats can also try to force the issue by asking unanimous consent to bring up a measure, such as they did on July 7. But it only takes one person to object, as Alabama Republican Bradley Byrne did repeatedly to Democrats’ requests to bring up the expanded background-check legislation.

Other moves are available, such as defeating the previous question motion. This motion formally ends floor debate in the House. If it is defeated, the minority can offer an amended rule to pending legislation, which opens the door to considering whatever the minority might want to consider. But these are usually easily batted down on party-line votes.

“House rules, if you know how to use them, are tilted toward allowing the majority to get its will done,” the late Speaker Jim Wright once said.

In that construct then, it’s not surprising the legislative outlook for what the Democrats want is murky.

Ryan and his team have said the chamber would vote on a measure similar to a Senate proposal sponsored by Senate Majority Whip John Cornyn of Texas that would prohibit suspected terrorists from buying guns and defines a turnaround time for the government to prove they shouldn’t be able to buy firearms. Republicans say it provides  due process.

Democrats point out that Cornyn’s proposal was voted down in the Senate on June 20, and criticize it as a sop to the gun-rights lobby.

Needless to say, they said they would oppose the measure.

And then some of Ryan’s own Republicans from the hard-right Freedom Caucus said they would oppose the bill because, among other concerns, it hadn’t gone through regular order.

Meanwhile, outside the chamber, gun-control groups sought to put pressure on the GOP for more aggressive measures, including the Rotunda sit-in and a rally on the Capitol steps on July 6 with House Democratic leaders. House Democrats continued reading the names of gun violence victims on the floor.

“We’re not going away,” Pelosi said.

But whether one closely follows regular order or speaks out of turn, disrupts pro forma sessions or duly reports legislation going nowhere, this particular episode on gun control demonstrates the limitations of either side to force the issue.

Rep. David Jolly, a Florida Republican, encapsulated the dynamic during his own one-minute floor speech on July 6.

“In the past few weeks, this conflict has played out in very real time on very closely held issues, personal issues, right here in this well. My friends on the left want to vote on a bill that will lose. It will lose. We on the right are often chastised for bringing up legislation that will be vetoed with the question, why even go down that road?”

It was a rhetorical question. But the week’s events, and the conciliatory response from the chamber’s leaders, might provide some sort of answer.